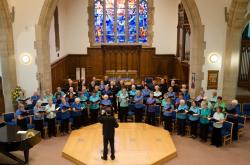 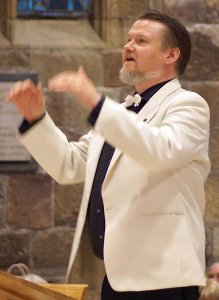 Since March 2017, Nigel Russell-Sewell has been our Music Director. Whilst studying Chemistry at the University of Kent, Nigel won a bursary to study singing for three years with Kathryn Lewis in Canterbury. He moved to London in 1994, joining the Philharmonia Chorus and was a founding member of the Quartet of St Giles-in-the-Fields. With the Philharmonia Chorus, under David Hill and Robert Dean, he sang for in Europe's finest concert halls for some of the world's greatest conductors; a particular highlight was singing for Pope John Paul II's 80th birthday in The Vatican. During this time he continued to study singing with Brian Trueman at the London College of Music. Moving to Sheffield in 2000, Nigel returned to sing in his native Buxton with the Buxton Madrigal Singers under the direction of Michael Williams MBE. He was awarded a Diploma in Music from the Open University in 2001. Nigel was appointed Songman in Sheffield Cathedral Choir in 2003. He has sung the roles of Father (Humperdink - Hansel and Gretel), and Samuel (Sullivan - Pirates of Penzance); in concert: Dichterliebe (Schumann); Songs of Travel (Vaughan Williams), Earth and Air and Rain (Finzi); Songs of the Sea (Stanford), Folk Songs (Britten); and a programme of Victorian Parlour Songs. Nigel has conducted Sheffield Cathedral Choir and plays the organ regularly out of term time, at Sheffield Cathedral, the four-manual Hill organ at the Parish Church of St John the Baptist in Buxton and had the privilege of accompanying the Buxton Madrigal Singers for Choral Evensong on the Harrison & Harrison organ at Durham Cathedral in September 2011. Nigel was Musical Director of Worrall Male Voice Choir from 2005 until 2019. With the Cathedral Choir, as well as appearing on a number of recordings and live broadcasts, he is delighted and humbled to have sung for Her Majesty The Queen at the Office for the Royal Maundy on 2 April 2015 and found trying to sing 'Zadok the Priest' with The Queen a foot behind him most challenging! Nigel has a PhD in Coal Science and heads the professional development team for learning and teaching at The University of Sheffield, teaching teachers teaching! He was delighted to be appointed Musical Director of Escafeld Chorale in 2017.