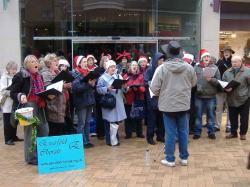 Tom Crathorne is a collaborative pianist, composer and musical director. He completed his music degree in 2018 at the University of Sheffield, where he was awarded the Dr Mo Sacoor Music Scholarship, and achieved a distinction on their Composition MA course, for which he was a recipient of the John Roach Postgraduate Scholarship. Tom approaches composition from an aesthetically focused standpoint and often tries to incorporate properties of and concepts relating to the physical world around us in his works. Additionally, he also has a deep interest in phonetics and language and enjoys composing with subtle shades of timbres and non-12EDO tuning systems to evoke different physical and aural sensations within the listener. He recently collaborated with poet Kathleen Swann for a commission by Leeds Lieder Festival 2019, where he performed his work The Bevin Boy alongside baritone and close friend William Kyle.

In addition to working with Escafeld Chorale, Tom works as a collaborative pianist in a variety of settings. He accompanies concerts and recitals, including semi-regular perforamnces at Firth Hall, and has recently been appointed as musical director of eight-part choir Octogenesis. He was the répétiteur for the English Touring Opera's Sheffield performance of Bach's Mass in B minor in 2019. He has also acted as audition pianist for Leeds Playhouse's 2019 production of The Wizard of Oz and the Crucible's Guys and Dolls auditions in Sheffield.