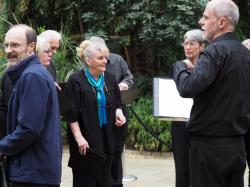 We are a mixed choir of around 70 members and have been an established part of the Sheffield music scene for fifty years. In 2019 we celebrated our 50th anniversary with two special concerts featuring some of our favourite music from the previouu fifty years, including a piece by Ron Law, who founded the choir in 1969 as the Fossdale Singers with a small group of friends.

Francis Wells conducted the choir from 1983 to 2001, and was followed by Peter Dutton (2001-13) and then Ian Roberts (2013-16). Following Ian's departure to Newcastle Cathedral, Francis Wells took up the baton again until we appointed our current music director Nigel Russell-Sewell, in 2017.

Under each new conductor we have expaned our repertoire. We sing a wide range of music from the choral repertoire, and are equally at home with full-scale requiem masses and unaccompanied part songs. You can find out what we have been singing in recent concerts here.

We regularly work with local soloists, accompanists and orchestras, and particularly enjoyed the three concerts with the Sheffield Philharmonic Orchestra under the baton of Ewa Strusinska. We are also keen to encourage young musicians in the Sheffield area. With this in mind we have set up a successful Associate Soloist scheme and regularly engage talented young instrumentalists to accompany our performances.

We generally give about four concerts a year, mainly in the western side of Sheffield, including a popular Christmas concert featuring seasonal music and readings and rounded off with mulled wine and mince pies.

We often raise money for local charities through our concerts and by carol singing in Sheffield city centre.