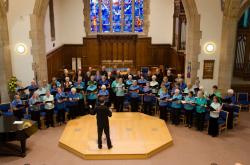 Escafeld began life as a small group of friends (the Fossdale Singers), and for many years, as the choir gradually grew in size, madrigals, part songs and anthems formed the mainstay of its repertoire. Once the choir was able to tackle larger-scale works, its repertoire increased significantly. We enjoy performing a wide range of choral music, from Palestrina, Byrd and Vivaldi, through Mozart, Haydn and Handel to Elgar, Parry, and Vaughan Williams, and Britten, Tippett and Rutter.

These are just some of the major works we have performed:

Britten, St Nicolas and Rejoice in the Lamb

Elgar, From the Bavarian Highlands

Inevtably, much of the choral repertoire consists of sacred music, and such large-scale works tend to feature in our spring concerts, which usually also involve young instrumentalists, mainly drawn from Sheffield University.

Our summer concerts, often performed at St Andrew's, Psalter Lane, are generally lighter in tone, and sometimes include music linked to a particular theme. These concerts have included opera choruses, excerpts from musicals, madrigals, and a wide variety of part songs.

At Christmas we generally give two concerts - one at Holy Trinity, Wentworth, and one in Sheffield (often at All Saints, Ecclesall). The Sheffield concert is often in association with a local charity. The tried and tested formula for Christmas concerts includes both music and readings, and seasonal refreshments are always served.

For more information about recent concerts, take a look at the Previous Concerts page.